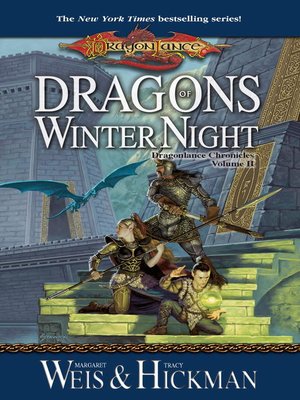 Time of the Twins Again, this was somewhat darker in tone than earlier books set in the Dragonlance world, and there are plenty of Eeek! Curiously enough, I think one of my favourite characters in this second trilogy was probably Dalamar. He's not perfect, he's playing both sides against the middle, and he has a couple of extremely unpleasant things happen to him on the way through.

He's a marvellous blend of evil and Trying To Do The Right Thing, and so seemed much more real in some ways, since he's not as firmly pigeonholed one way or another as some of the other characters. Aug 09, Jediraven rated it it was ok. This review has been hidden because it contains spoilers. To view it, click here. I don't know that I am even going to read anything else in this series, because all of the characters in this book were whiny little bitches.

These men cried more than anyone I know who saw the beginning of Finding Nemo it was sad!

Other books: BOOKS OF EMBER EPUB

Not to mention, Raistlin died and Crysania didn't. Crysania was such a horrible person. I loved, loved, loved the original Dragonlance books.

Dragonlance - Legends 03 - Test Of The Twins

I couldn't put them down. Now the only reason I finished this I don't know that I am even going to read anything else in this series, because all of the characters in this book were whiny little bitches. Now the only reason I finished this one was because I was hoping Crysania and Caramon would both die. I'm going back to reading Steven King novels. Jan 16, Jay rated it really liked it Recommends it for: Very nice conclusion to the original trilogies!

Nice to see the return of old friends Tanis and old enemies Kitiara, Lord Soth and some character arcs closed!

This was a very satisfying conclusion. Navigation menu If I never read another Dragonlance book, I could move on and be happy. I still enjoy the world and I would love to read more about Lord Soth, but I can move on feeling satisfied here. The first trilogy left me ki Very nice conclusion to the original trilogies! The first trilogy left me kind of cold, but this one makes up for it!

Legends" is actually a good series. And that's weird, because game-inspired books do tend to suck big time.

And that's just great, because too often fantasy heroes tend to be completely immune to distress and we know that human mind doesn't work that way.

I waited untill I finished all three books so I could compare before rating. It started out great but certainly went downhill from there: Time of the twins: The covers were so cheesy: Gotta love that old book smell!

Overall I had less issues with these books than with the dragonlance chronicles. They felt a bit more mature. It was great to read again about my favourite characters: But seriously, what is up with this Raistlin guy? So mysterious, intriguing and deliciously evil. I grew more and more tired of Tasslehoff as the books went along. This was probably why my ratings went down a bit. Lots of action and some very surprising twists. Just escaping to another world filled with adventure, honour, love, friendship Jan 04, Antonis rated it it was amazing.

This review is about the whole trilogy This is an amazing series. Suffice it to say that I'm not a book re-reader and those three are the only books I've ever read for a second time!!

Even though this is typically a plot-driven series, the main fuel behind the plot are the characters and their aims and deeper wishes. Seriously, if you're a fan of fantasy, just go read it! You will not be disappointed. Chronicles and Legends are two trilogies that hold a really special place in my heart. So much so that I can't really divvy them up into separate reviews.

I don't even think I could give an objective review of the books. But if I know this: I've had to replace these 6 books so many times that I keep spare copies around just in case. Test of the Twins Aug 31, Dale rated it really liked it Shelves: Fifth book of the commute, rounding out the "Legends" trilogy. Really not much to add that hasn't already been covered in my review of the first two volumes. The trilogy finishes with a bang, a satisfying but bittersweet conclusion.

Again, it's the characterization of Caramon and Raistlin and the dynamics of their brotherly relationship that sets this book a notch above most others in the genre. A good conclusion to a slow starting trilogy and is it wrong that I'm glad Kitiara finally got what she deserved? Yeah I didn't think so another wonderful addiction for me. Raistlin Majere remains a favorite. They are books I have not read for a while. In fact, I had completely forgotten about the character Elistan.

I suppose he just wasn't action-filled enough for me when I was younger. This third volume of the trilogy was good, but it just wasn't as good as the first two. The first volume set up an amazing story that took place in an amazing time. The second volume in the Legends trilogy kept the story moving. Arguably the second volume was even bet I finished re-reading Chronicles and now Legends.

Arguably the second volume was even better due to the character development involved. The one weakness I noted in the middle volume was that Raistlin seemed too weak throughout the story. Also, the whole battle of Palanthas, while it filled a number of pages, seemed to be pointless. The first time Palanthas was attacked and Sturm fell defending the tower was a huge turning point in the War of the Lance. This time it was just filler - what did any of it matter compared to The Dark Queen coming escaping the Abyss or Raistlin becoming a god?

Raistlin is chagrined to find that the portal to the Abyss has moved to the fortress of Zhaman, far to the south. 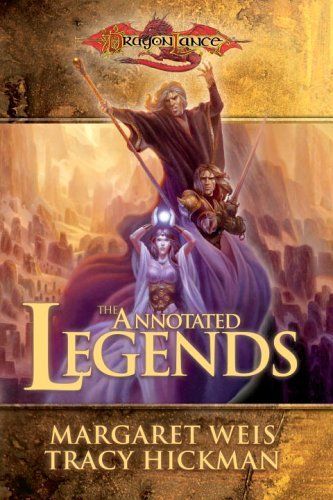 Having assumed Fistandantilus's identity, Raistlin soon discovers that he seems doomed to repeat Fistandantilus's past actions as well. As the three travellers head south, they almost unwittingly begin to amass an army under the pretence of attacking the dwarven kingdom of Thorbardin, just as Fistandantilus did - an effort that led to Fistandantilus's death. Raistlin gains hope that history can be changed when Tasslehoff reappears, having escaped the Abyss - he was sent there with the Temple of Istar when it was destroyed.

The army reaches Zhaman and Raistlin begins the spell to open the portal, with Crysania's help.

They travel back to the present to stop Raistlin from leaving the Abyss.

Raistlin battles Takhisis's minions in the Abyss with Crysania's help. Crysania is mortally wounded, but Raistlin leaves her behind, telling her that he no longer needs her. Caramon and Tasslehoff arrive in Palanthas to find it under attack by Kitiara's forces. After seeing the future that will come about if he leaves the Abyss, Raistlin chooses to stay behind to stop the Dark Queen from passing through the Portal into Krynn, while Caramon and Crysania flee to safety.

With Raistlin's help, Caramon seals the Portal shut, and Krynn is saved. From Wikipedia, the free encyclopedia. Main article: Time of the Twins.

Both download and print editions of such books should be high quality. Very well written and distinct characters, passion, drama, magic, more magic, ex This review is about the whole trilogy This is an amazing series.

Raistlin's story is the excellentest part of Time of the Twins. Also, the whole battle of Palanthas, while it filled a number of pages, seemed to be pointless.

Or are you an exile, banished from your homeland for some crime against the Undying Court?

CLEO from Killeen
I love interestingly . Look over my other posts. One of my hobbies is element collecting.
>